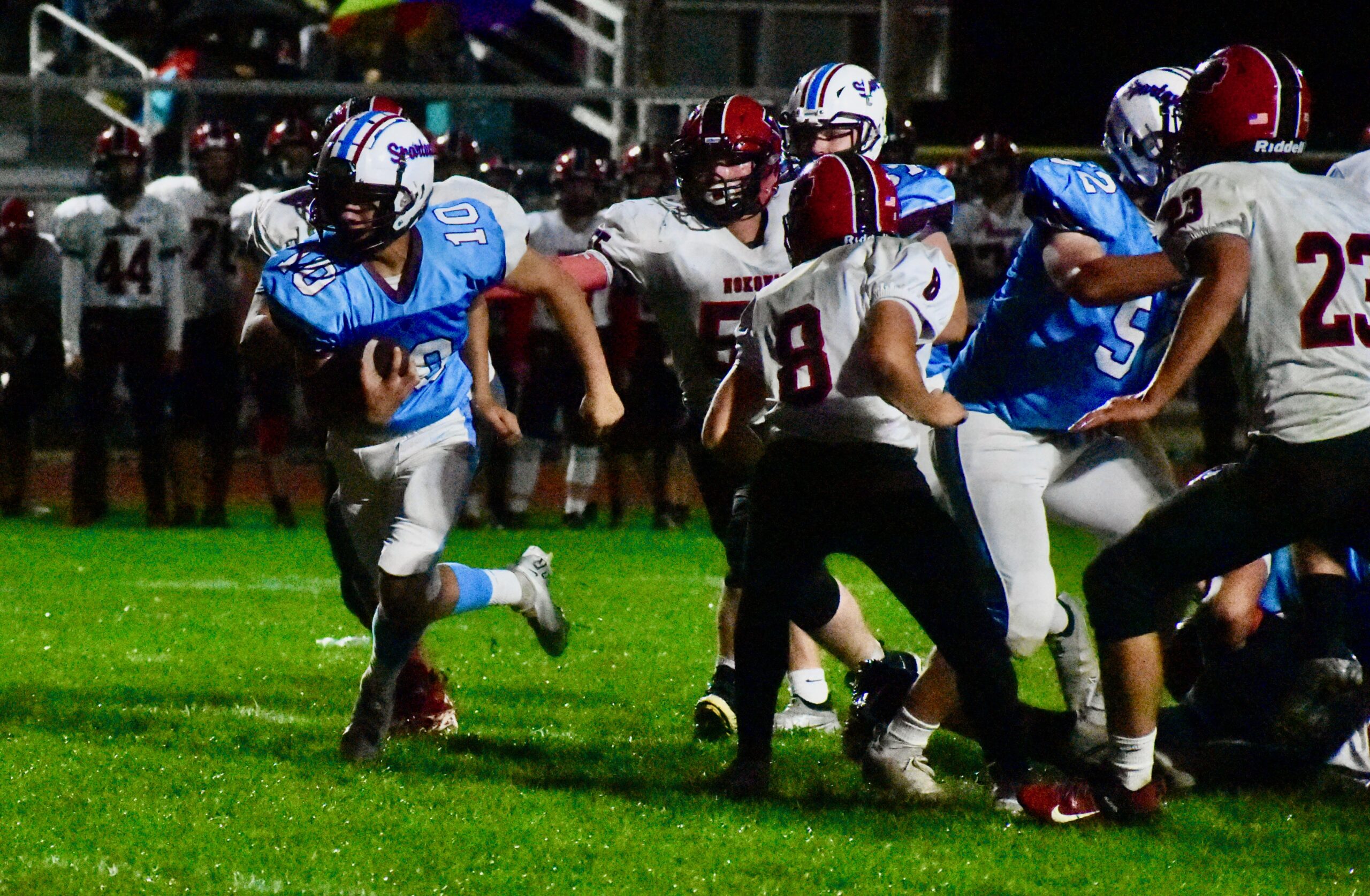 It was a happy homecoming for the St. Joseph-Ogden football team.
And with the Spartans defeating Nokomis 42-12 this past Friday night in a nonconference game at Dick Duval Field, SJO is halfway towards securing a playoff berth.

Granted, SJO (3-2, 2-2 Illini Prairie Conference)) will have to win three of its final four games in order to reach the six-win mark needed to automatically qualify for the IHSA state playoffs.

Here’s a roundup of what has transpired recently for the Spartans:

Offense excels in Nokomis win
The Spartans wasted little time asserting themselves against Nokomis. SJO led 21-0 at the end of the first quarter and 35-0 at halftime.
SJO junior quarterback Logan Smith continued his stellar season, completing 12 of 15 passes for 305 yards, two touchdowns and no interceptions. It was the third straight game Smith has thrown for at least 300 yards.

Smith was involved in two of the three first-quarter touchdowns against Nokmois, running for an 8-yard score to put the Spartans ahead 7-0 before junior Justice Wertz rushed for a 14-yard touchdown and then Smith found senior Tyler Burch on an 8-yard touchdown reception to push the Spartans’ lead to 21-0.

Wertz found the end zone again in the second quarter on a 3-yard run and then Smith completed a 30-yard touchdown pass to sophomore Coy Taylor that gave SJO a 35-0 lead. Joe Frasca made all five extra-point attempts for the Spartans.

A 1-yard run by Burch early in the third quarter padded the Spartans’ lead to 42-0 and prompted a running clock the remainder of the game.
Wertz finished with 56 rushing yards on six carries, while senior Ty Pence added 101 receiving yards on three receptions.

Strong passing night leads Spartans past Grey Ghosts
Smith established a single-game record for passing yards at SJO with his pinpoint accuracy and deep-play ability by his receivers during the Spartans’ 41-14 win at Chillicothe IVC on Sept. 16.

After Prairie Central led 7-0 after the first quarter, the Spartans tied the game at 7 with 10 minutes left in the second quarter following an 8-yard touchdown pass from Smith to Moberg.

But Prairie Central went into halftime ahead 21-7 and extended its lead to 28-7 by the midway point of the third quarter.

The Spartans, however, responded with a 1-yard touchdown run by Wertz and a 13-yard touchdown pass from Smith to Pence to trim their deficit to 28-21 with 19 seconds left in the third quarter.

Prairie Central increased its lead to 35-21 within the first minute of the fourth quarter, but a 30-yard touchdown pass from Smith to Taylor with 4:52 remaining in the game cut SJO’s deficit to 35-28.

But Prairie Central overwhelmed SJO late, scoring three touchdowns in the final 3:25, including a game-sealing 40-yard interception return for a touchdown by Drew Fehr.

Smith went 19 of 34 for 312 passing yards, three touchdowns and three interceptions. Pence and Taylor were his favorite targets, with Taylor recording 10 receptions for 142 yards and Pence hauling in five passes for 143 yards. Prairie Central held the SJO run game in check, with Smith producing a team-high 26 rushing yards on nine carries.

Prairie Central gashed the Spartans’ defense for 518 rushing yards, with Tyler Curl (eight carries for 143 yards, one touchdown) and Camden Palmore (13 carries for 119 yards, three touchdowns) leading the way for the Hawks.

Strong run game propels Rockets past Spartans
The first home game of the season for SJO didn’t end well for the Spartans, with Unity cruising to a 50-7 win at Dick Duval Field on Sept. 2.
The Rockets relied on 251 rushing yards and five touchdowns on 30 carries from Garrett Richardson, while quarterback Cale Rawdin added 159 rushing yards and one touchdown on 11 carries.
Unity led 20-0 at the end of the first quarter, 28-7 at halftime and 42-7 to start the fourth quarter.
The Spartans only registered 79 yards of total offense against the Rockets. Smith went 8 of 17 for 57 passing yards, one touchdown and two interceptions. His 10-yard touchdown pass to Pence in the second quarter accounted for the only points on the night for SJO.
Taylor caught a team-high four receptions for 38 yards, while Pence added three catches for 18 yards. Unity held SJO to only 22 rushing yards on 23 carries.

By Nora Maberry September 26, 2022
in Athletics