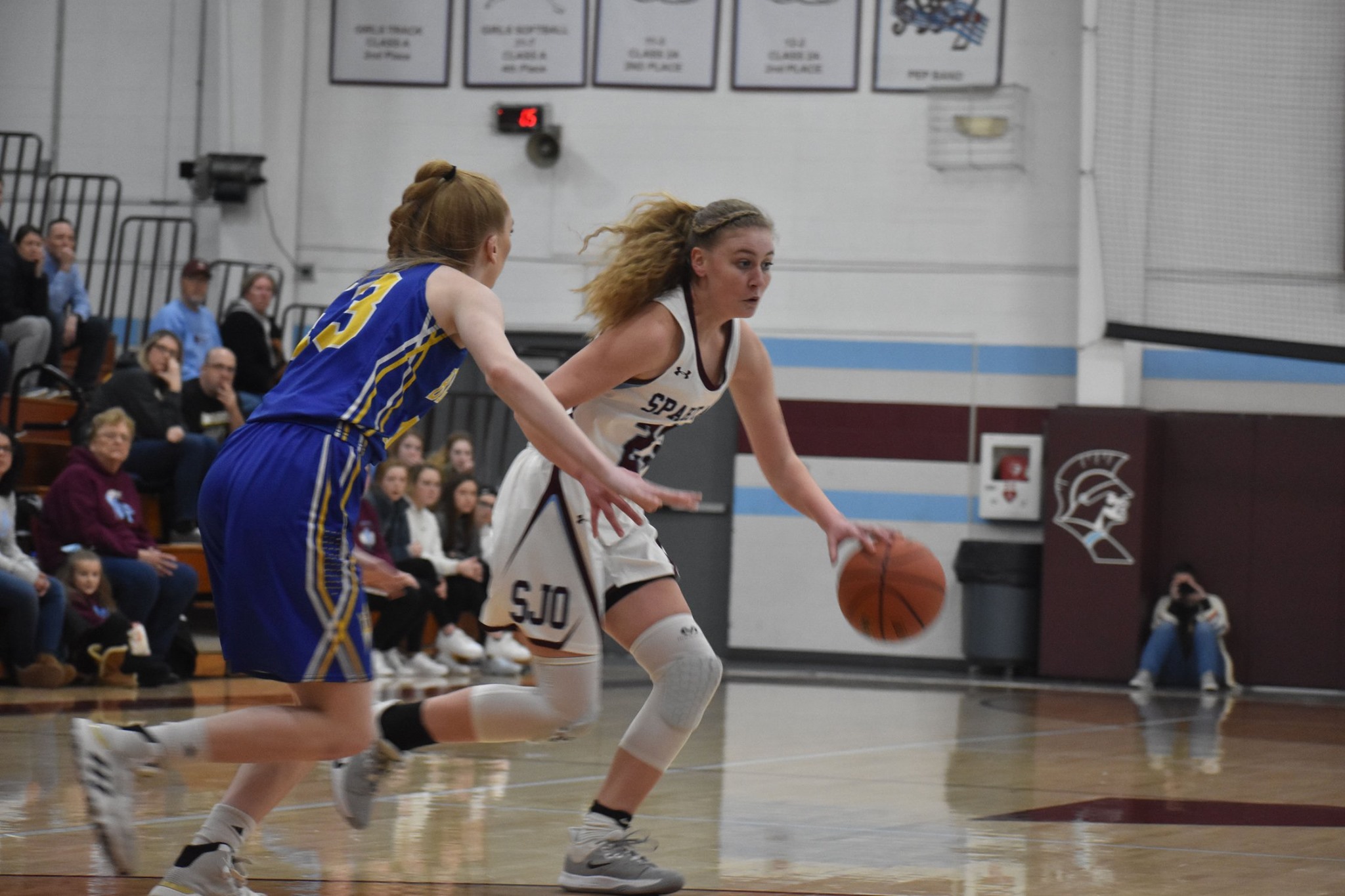 A good outside shooter can open up a basketball team’s offense.
In more ways than one. Add a second presence from beyond the
three-point line, and the options abound.

The St. Joseph-Ogden girls’ basketball team used this strategy to its
advantage on Thursday night, picking up a 44-29 home win against rival
Unity in Illini Prairie Conference action.

The win keeps SJO (4-0, 3-0 Illini Prairie) unbeaten on the
abbreviated season after the Spartans also earned a 64-32 Illini
Prairie home win against Rantoul on Feb. 11. The Spartans were
scheduled to play at Bloomington Central Catholic on Tuesday night,
but the game was postponed because of inclement weather.

Ella Armstrong and Ashlyn Lannert supplied superb outside shooting
against Unity, with Taylor Wells providing steady scoring inside.
Armstrong scored 14 of her game-high 16 points in the second half
against Unity, draining four three-pointers after halftime. Lannert
finished with 10 points, including one three-pointer in the first
quarter and another in the third quarter.

Wells had eight of her 10 points in the first half, helping keep SJO
in the game despite Unity holding a 19-15 halftime lead.

The Spartans’ defense clamped down in the third quarter and Armstrong
stepped up her game to give SJO a 30-22 lead entering the fourth
quarter. Aside from strong scoring efforts by Armstrong, Lannert and
Wells, Payton Jacob (four points), Atleigh Hamilton (two points) and
Nora Walden (two points) also hit the scoring column.

SJO didn’t need a second-half comeback to register its win against
Rantoul last week. The Spartans led 15-7 at the end of the first
quarter, increased their advantage to 30-10 at halftime and enjoyed a
48-23 lead to start the fourth quarter.

Armstrong scored a game-high 16 points in the win against Rantoul,
sinking two three-pointers and all six of her free throws. Jacob also
hit double figures with 12 points, but Armstrong and Jacob also had
plenty of offensive help.

Now, SJO will turn its attention to another home game when the
Spartans are scheduled to host Tuscola at 2:30 p.m. on Saturday in
nonconference play. SJO gets back to Illini Prairie play with a 7 p.m.
tip scheduled for next Monday at Pontiac.