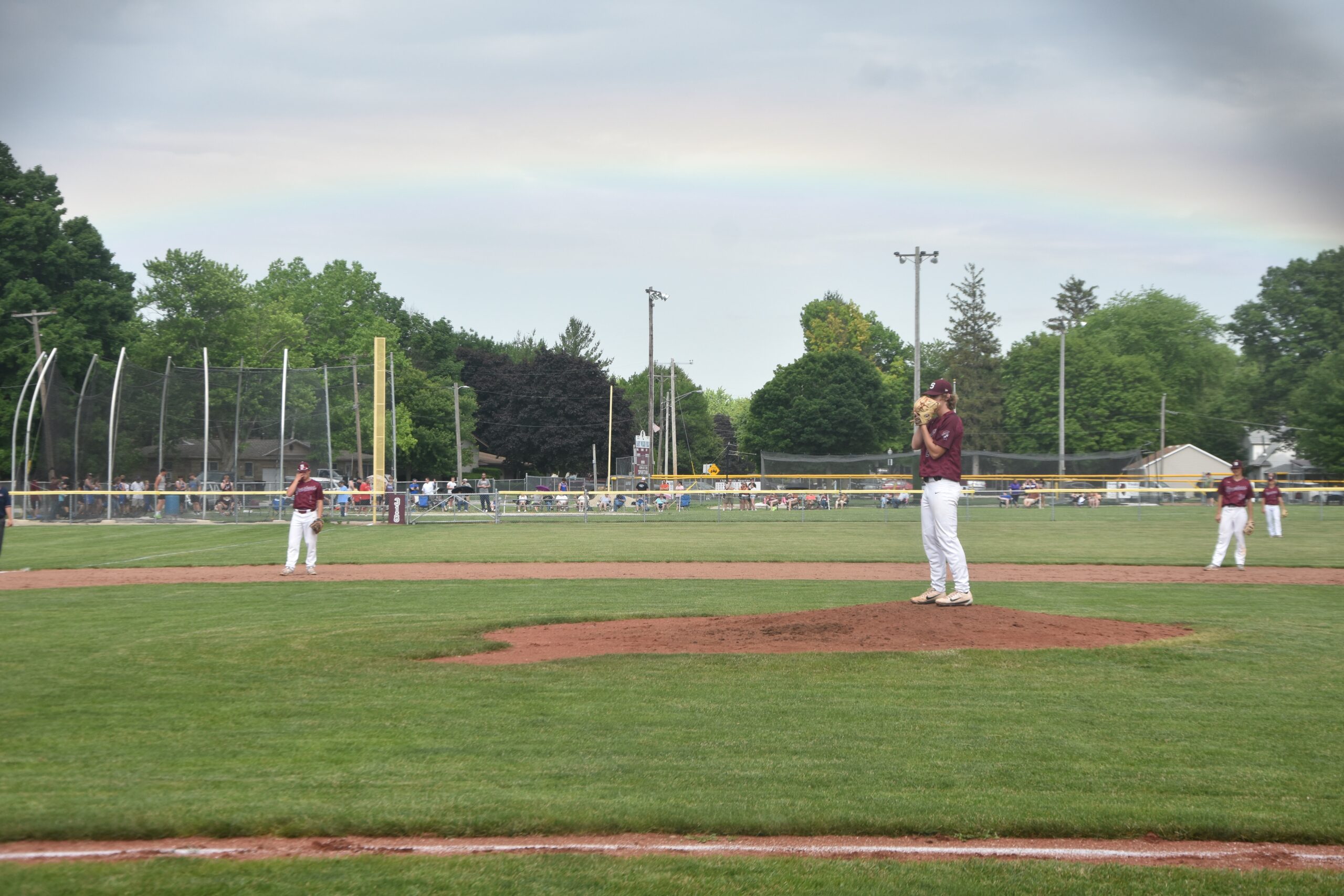 —-ST. JOSEPH—-
There is an adage in baseball that a good offense wins games, but good defense wins championships.

It does not hurt to have an arm like Crayton Burnett on the mound as well to make either of the first two precedents ring true.

Burnett was once again masterful for the St. Joseph-Ogden Spartans varsity baseball team, throwing yet another complete game shutout in a 7-0 win over the Shelbyville Rams in a sectional semifinal game on Wednesday afternoon at the Glenn Fisher Sports Complex in St. Joseph.

Burnett surrendered a first inning hit to the Rams’ third hitter, then proceeded to retire the next 19 Shelbyville batters to notch his tenth win without a loss, lowering his earned run average to a staggering 0.34. Burnett has pitched 55 2/3 innings this season while allowing only three earned runs while walking just four batters. Burnett has 126 strikeouts this season, befuddling hitters of opposing teams as they come to bat against him.

“I felt really good out there today and my arm felt fine from the short outing on Monday. I was in a good rhythm with the coaches’ pitch calling and the defense behind me played great as well,” Burnett said following the game on his performance after coming in to finish the job in the regional championship on Monday.

Burnett, who needed just 82 pitches to dispatch the Shelbyville did not walk a single batter and was near the plate all afternoon long, throwing 63 strikes from a variety of three different pitches.

“He (Burnett) was tough today and had his stuff rolling very well. They (Shelbyville) got some good swings in and until we broke through in the bottom of the sixth inning, it was very much a game that was tight all the way through,” SJO head coach Josh Haley said after the game on his pitcher’s outing and how he controlled the tempo.

Tyler Altenbaumer continued to swing the bat well, going a perfect 4-4 at the plate with 2 runs batted in. Keaton Nolan provided some punch at the bottom of the lineup, going 3-3 with a double, driving in one run and scoring twice. Andrew Beyers also was 2-3 at the plate, while Hayden Brazelton, Coby Miller, Isaiah Immke and Zach Martinie each had one hit for the Spartans (32-2).

Burnett drove in the other run for St. Joseph-Ogden without the benefit of a hit and cruised on the mound to help his team advance to the sectional final.

Regarding the offensive output, Haley talked about the strength of the lineup from top to bottom, one of the many reasons his team is having the season that they are.

“Today, it was the bottom of our order (7-8-9 hitters) that did a lot of the damage. We have a lineup of nine batters that can pretty much hit in any spot in the order, and that is huge, especially at this point of the year,” Haley added on the versatility of the hitters in his lineup.

The Spartans advance to the sectional championship game on Saturday and will face the Paris Tigers, who defeated Maroa-Forsyth 3-2 on Wednesday afternoon in Maroa.

Game time on Saturday with Paris is set for a 11:00 am first pitch from the Glenn Fisher Sports Complex.