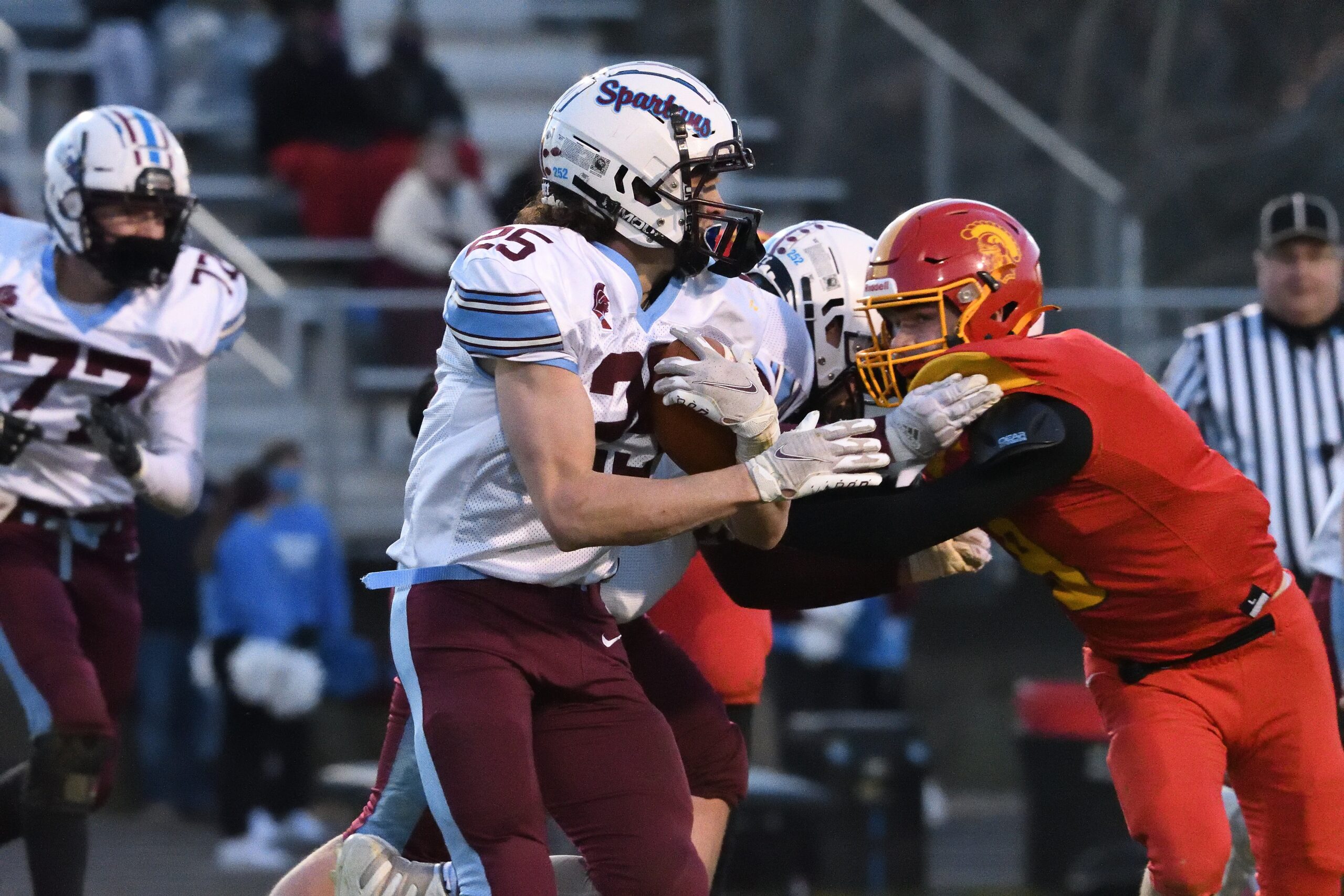 The St. Joseph-Ogden Spartans varsity football team traveled out of conference on Thursday night, and was defeated 56-14 by the Charleston Trojans at Trojan Hill in Charleston.

In an agreement between the Illini Prairie and Apollo conferences, the two leagues decided to crossover, playing a game with a member of the other conference in this unique spring football season. As a result, the Spartans drew Charleston, a Class 5A school, as their opponent.

Charleston dominated the line of scrimmage the entire game, as the Spartans had little success stopping the Trojan offense. Charleston took an early 7-0 lead and soon doubled that lead when Spartan quarterback Evan Ingram was picked off, resulting in a pick six for a Trojan score.

Junior Keaton Nolan led the SJO ground attack with 24 carries for 113 yards, while sophomore Tyler Burch had 7 touches for 101 yards, including a 47-yard run for a touchdown in the fourth quarter. Nolan also scored the other Spartan touchdown with a three-yard score late in the game.

Ingram, who doesn’t pass the ball very often, was 6-12 for 33 yards, which included three interceptions. Ingram did spread the wealth among his receivers, with six players getting once catch each. Brady Buss had one catch for a yard, while Nolan ( 1 for 8), Jackson Rydell (1 for 7), Alex Funk (1 for 8), Xander Rieches (1 for 4) and Jett Morris (1 for 5) rounded out the receiving grabs.

Trojan quarterback Jack Nelson completed his first nine passes, and for the game, was 12 for 17 for 238 yards and four touchdowns. Brayden Rennels led Charleston with 5 catches for 73 yards, while Tyler Thompson had four snags for 23 yards. Rounding out the receiving yards for Charleston were Cory Spour (1 for 49 yards), Sam Schuette (1 for 43) and Ty Coartney (1 for 50). Spour also had 6 carries for 47 yards and returned another of Ingram’s interceptions for a short touchdown.

While the game wasn’t in question for much of the contest, SJO did earn some valuable experience from some of their younger players, who are seeing their first varsity action. Injuries have also played a significant part in the Spartans’ early struggles, as they have lost an interior lineman and most recently, their starting punter, to injuries that will see those players miss multiple games.

St. Joseph-Ogden will return to Illini Prairie Conference play on Friday night when they travel to Tolono to battle the Unity Rockets at Hicks Field. Game time with rival Unity is set for 7:00 pm.